I found an exhibit called C’est La Vie, the same name as my blog at Le Musee Maillol. What I find interesting is that the title is “C’est La Vie” meaning “That’s Life” but the exhibit is all about the outbreaks of war and images of death. There is quite a distinction between the paintings, photographs, sculptures videos, jewelry, and objects of skulls on displayed throughout rooms. It starts with colorful presentations of contemporary art and works backwards in time, providing the audience with unusual approaches to art history. 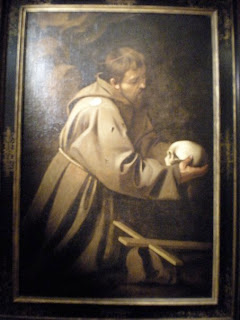 An American article I found called “Vanities from Caravaggio to Damien Hirst at MuséeMaillol,” talks about the art of the older time periods. The author, Olivier Lorquin, calls these periods, ‘The Elders’ “Tempus fugit.” He talks about the Middle Ages, when the skeletons’ dance of death was invented, and the “memento mori”, where a skull’s unhinged mouth is glimpsed behind the portrait of the deceased. He then explains how the Black Death is combined with the Hundred Years’ War and the new Christian theology and they all brought horrible death into the field of art. He later talks about how the Renaissance re-awakened that celebration in all its violence. These works of art are shown in the museum. They were few of the paintings I could understand the importance of. Artists try to portray disease and death with the importance of religion. 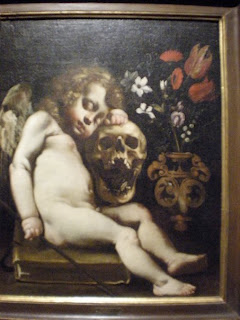 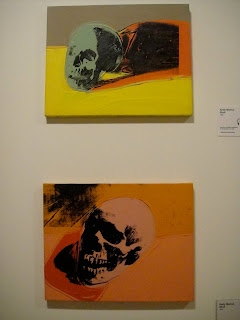 Lorquin calls the modern period, The moderns’ “God is Dead!” There is an Andy Warhol piece of brightly painted skulls. He describes it as a “post-war art that glorifies the consumer society by renewing with the art of death.” Andy Warhol is known for a visual art movement known as pop art. I find it interesting Lorquin says this modern art is renewing death because it glorifies consumers because Andy Warhol and other artists of the 1970s focused on commercial illustrations.

I read a French article on Le Monde about this exhibit called “Crânes, transis, squelettes... au Musée Maillol, que d'os, que d'os!” I love that the author, Philippe Dagen, “La mort n'y est pas une tragédie spectaculaire, mais une évidence à laquelle la religion permet, peut-être, de s'habituer.” The art put on display in this exhibit is nothing but skulls decorated in various ways which makes is seem like death can be looked at as something extravagant. There is one piece of a skull covered in jewels and there are numbers of items of expensive jewelry decorated with symbols of death.

I found the exhibit very strange and even emotionally disturbing at times. It goes well beyond the morbid representations of death in an attempt to push back the limits of life. I can understand these artists are attempting to show the importance of the thousands of deaths that have taken place from war and disease, but some of the pieces on display just didn’t wake sense to me like a video of a boy kicking around a skull like a soccer ball. I guess all I can say is “One day your life will flash before your eyes. Make sure it’s worth watching.”