As I sit here thinking about everything I’ve seen, everything I’ve experienced, all the people I’ve met, all the things I’ve done that I'd never done before these last 3 months, I can’t help but smile and nod my head. I never thought I’d have all these memories and pictures to look back on. I left a life of repetition and familiarity for a life of the unknown. I left loved ones to be on my own. This was something I needed to do for myself, because if I hadn’t it would’ve definitely been my biggest regret.

There comes a time when you must stand alone. You must feel confident enough within yourself to follow your own dreams. You must be willing to make sacrifices. You must be capable of changing and rearranging your priorities so that your final goal can be achieved. Sometimes, familiarity and comfort need to be challenged. There are times when you must take a few extra chances and create your own realities. Be strong enough to at least try to make your life better. Be confident enough that you won't settle for a compromise just to get by. Appreciate yourself by allowing yourself the opportunities to grow, develop, and find your true sense of purpose in this life. Don't stand in someone else's shadow when it's your sunlight that should lead the way.

I have grown so much from this experience and been put in situations I never thought I’d be able to pull myself out of. I have seen so much and at the same time have not seen nearly enough. There is still so much of Europe to see. Three months is not nearly enough to see all of Paris, but I am so blessed to have seen everything I have. 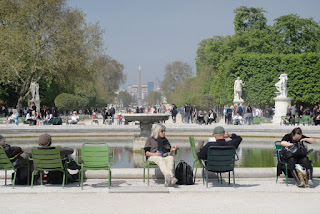 Every time I visit a new city I visualize a globe and pin point myself in the world. It amazes me to envision myself at that certain point on Earth. As I walked along Jardin des Tuileries from Le Louvre to Concorde enjoying the warm sun on my back, I stood at the center of the garden. I had Le Louvre at my back, L’Arc de Triumph to my front and the Eiffel Tower to my left. Standing in that one spot imagining where exactly I stood on Earth and how much I could see from such a tiny point was illusionary. No words can describe the feeling of trying to take it all in. All these surroundings I've come to know so well, that I've heard so much about, that have so much history, were standing so close to me. 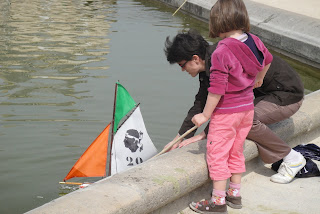 As I sat in Jardin du Luxembourg today watching the kids sail boats in the pond outside Le Senat, I thought about going back home in a couple of days. I thought about telling my family all the stories of my adventures and everything I’ve seen, but no pictures or words can come close to this reality. I thought about shifting through these hundreds of pictures I've taken here, thinking back to that moment in time; where I was, what I was doing, who I was with, and how I was feeling at the time. 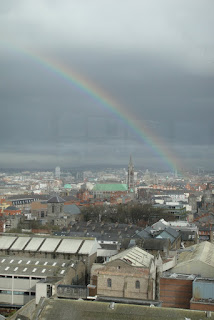 I know I’ll stare at my computer screen for hours looking at the pictures thinking about my time here and how remarkable it was. As of right now, I am enjoying my last couple of days here because I have so much to do when I get back. I have to get ready for graduation, find a place to live, get a job, and prepare myself for reality.

Before I left for this trip I told myself…

Pick some flowers and appreciate the beauty of nature. Say hello to strangers and enjoy the people you know. Don't be afraid to show your emotions because laughing and crying make you feel better. Feel the calmness on a quiet sunny day. Find a rainbow and live your world of dreams. Always remember life is better than it seems...

And that’s exactly what I did!

There are plenty of stereotypes about the French, some of which include, they smell and don’t shower often, they are rude, and they hate Americans. But don't be fooled by these myths and urban legends because the truth is far more interesting.