According to USelections.com, Elections for President and Vice President of the United States are indirect elections that occur every 4 years. The United States Congress, is a bicameral legislature of the federal government of the United States, consisting of the Senate and the House of Representatives, which are chosen through direct election. Each of the 435 members of the House of Representatives represents a district and serves a two-year term. House seats are divided by the states' population. The 100 Senators serve six-year terms. Each state has two senators, regardless of population. Every two years, approximately one-third of the Senate is elected at a time.

France like the U.S. is a representative democracy. Public officials in the legislative and executive branches are either elected by the citizens or appointed by elected officials. France elects on its national head of state, the president, every five years. 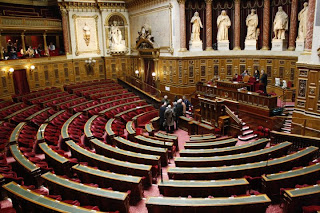 Le Parlement, similar to the U.S. Congress, has two chambers, L’Assemblée Nationale and Le Sénat. L’Assemblée Nationale has 577 members, elected for a five-year term in single seat-constituencies directly by the citizens. Le Sénat has 321 members, 304 of which are elected for six-year terms by an electoral college consisting of elected representatives from each department.

Voters in America and France citizens over the age of 18 registered on the electoral rolls. In France, registration is not compulsory, but the absence of registration precludes the possibility of voting. Currently, all youths reaching the age of 18 are automatically registered. In general, voting is done using paper and manual counting. An individual walks to the ballot box and shows his voter registration card and is required to prove his identity. The ballot box is opened and the voter inserts the envelope.

According to the BBC News, The first round of voting took place on Saturday, 21 April 2007 and Sunday, 22 April 2007, which had very high turnout of 83.8%. The results of that round saw Nicolas Sarkozy getting 31% and Ségolène Royale getting 26% qualify for the second round. As no candidate obtained a majority (50 percent plus one), a second round began between the two leading candidates. The four defeated left-wing candidates, José Bové, Marie-George Buffet, Arlette Laguiller and Dominique Voynet, urged their supporters to vote for Royal. This was the first time since 1981 that Laguiller had endorsed the Socialist Party's candidate. Bayrou then declared he would not support either candidate in the runoff, and that he would form a new political party called the Democratic Movement. In the end, Royal conceded defeat to Sarkozy with 53% of the votes.