America often prides itself on being a "melting pot," where cultures of every kind come together. There are cultural celebrations to honor many different ethnicities and in general, there is a certain American pride about being multi-cultural by definition. Not only can you hear several different languages when you're out and about, but you can also hear an entirely different dialect of English depending on where in the United States you are.

Communication between individuals in America is based on a concept of time.

Americans like to get straight to the point because they live busy lives and don’t have the time to have long drawn out conversations. Most lunch breaks are 30 to 45 minutes long, so no time for chatting. Eat and get back to work.

While you will not find France to be homogenous in terms of ethnicity, the French are fiercely protective of the language and traditional French culture. While the French can certainly be described as hospitable, there is an expectation that outsiders should conform to French social customs. Parisians live a much more laid back lifestyle. During the day, when you think most people would be at work, people are chatting over drinks at a local café or taking their dog for a walk. 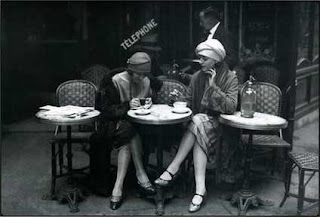 I have noticed the French always greet you with “Bonjour” or “Bonsoir” before they say anything else to you. Americans don't say hello before asking questions or making comments. This might be why the French regard Americans as rude. Like I said before, they jump straight into conversation to get their meaning across as fast as possible because of their fast paced lifestyle.

American's take their job and working life very seriously. I'm not saying the French don't either, but sometimes it's okay to just take a chill pill and relax. Enjoy a beautiful day, take notice of your surroundings, listen to and observe other people. Learn from it and live it. Life's too short to constantly live around a time schedule. Open your ears and eyes and live life to the fullest!!